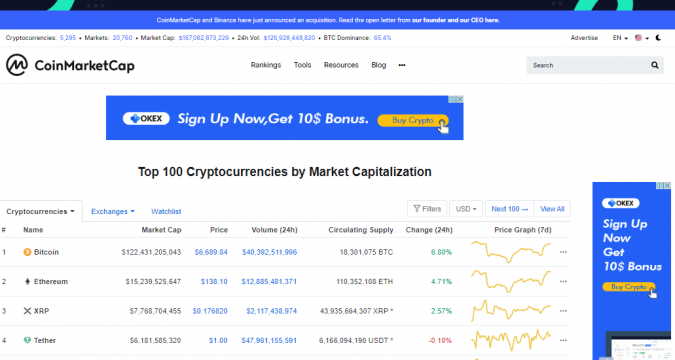 Leading cryptocurrency outfit Binance made an official announcement today on it’s website that it had acquired one of the global heavyweight coin market cap for an undisclosed amount. CoinMarketCap which is known for its data tracking ability will still continue to run as an independent entity but will now belong to Binance after it was purchased.

Speaking at an interview, the CEO of Binance Changpeng Zhou said:

“The core DNA of CoinMarketCap is strongly aligned with Binance’s ethics and culture, from its integrity to its value of freedom, transparency, and user-focus.”  “Our common vision will be strengthened by this acquisition to further growth and instill transparency in the industry. This will enable us to build on each other’s strengths, jointly serving as infrastructure providers of crypto.” he further stated.

CoinMarketCap has in turn announced that on it’s part, it would still continue to provide services for it’s previous customers whilst service new and incoming clients. They said they would bolster their services by providing the highest level of information and improving it’s ranking methodologies. With their recently launched liquidity metric and added derivative market data, they will help their customers speed up their decision making process.

They further added the new rating metrics and analytics from trusted partners data to further help their customer base. They have promised to expand their services to include trading products such as futures, options, lending, and value added data and analytics for the benefits of their clients.

As part of the changes that would undergo the administration at CMC, founder and CEO Brandon Chez would step down and would immediately be replaced by Carylyne Chan, the current chief strategy officer. While Chan would act as interim CEO for the time being, Chez would remain strictly as an advisor to CoinMarketCap.

“I believe that of all the teams in the space that could acquire CoinMarketCap, Binance is one of the very best options. They are a team that has shown, time and again, that they care about their users and will do the best for them, even in the most challenging of times,” said Chez.

With CoinMarketCap leading the race as one of the most sought after trading and exchange outfit since inception, they have been able to maintain their Independence from external investors up till this point.

When quizzed, Carylyne Chez the interim CEO of CoinMarketCap was quick to talk to reporters, she was quoted as saying:

“I am optimistic about this new phase of growth for CoinMarketCap.” “Ever since our humble beginnings in 2013, we have been public about our commitment to remaining neutral by avoiding censorship and judgment of projects or exchanges that we list, preferring to let users make their own decisions based on the data. We are delighted that the Binance team has been unequivocal in ensuring that we can continue to adhere to our methodology without prejudice.” she further added.